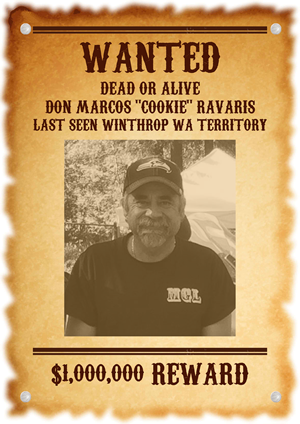 Marc Ravaris, is known as “Cookie” to the MGL gang, as he usually drives the chuck-wagon with the group’s supply of rot-gut liquor, salt pork, and beans.

Regarded as foul-mouthed and foul-tempered, he is know throughout the west as carrying multiple weapons at any time, not the least deadly of which is his double, short-barreled, 12-gauge stagecoach shotgun he affectionately calls “Nanny”. He not only uses “Nanny” to dispense with unwelcome dinner guests, he uses her to mix one of his special recipes that he serves for dinner sometimes, a gigantic cauldron of a vile, bubbling substance  known only as “soup”. No one knows what is in “soup”, but is is said to be so corrosive that it melts the blueing off of his precious shotgun when used to mix “soup”. He is said to sleep with “nanny”, not only for affection, but to keep fellow gang members from raiding the chuck-wagon at night.

In fact, while known to be lower than a snake’s belly (so low in fact he once shot a man who would have died 10 minutes later anyway) and deadly with his weapons, it is said that his cooking, and especially “soup”, is even deadlier than his guns. One of the initiation rites of the MGL gang is for prospective members to be invited to dinner, and if they survive eating “soup”, then they are known to be hard-to-kill and accepted into the group.

Be especially careful if you come across him without the gang, as they often travel separately. This unassuming, but long-winded story-teller, is known to rob unsuspecting travelers, first by inviting them for “soup” which partially kills them, then lulling them into a false sense of security with a long, bad story, and then finishing them off with one of his many guns, with the goal of stealing their money and supplies to support the gang. Remember, if he wants you to “talk to Nanny”, that’s not a good thing.

Known to sometimes travel with gang member, “Salsa Cuchillo” — beware — like birds of a feather, this tandem can be especially nasty when found together.