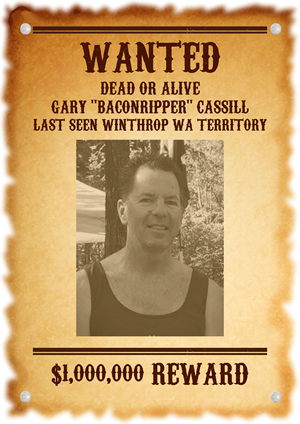 Gary “BaconRipper” Cassill is a long-time member of this lower-than-a-snake’s-belly group of no accounts.  His moniker is an updated version of his original nickname, “GrandpaRipper.” However, it is believed even the name “GrandpaRipper” is a misnomer.

Not much is known about this shadowy figure — legend shrouds him in mystery. It is known that he is one of the original steel-horse ridin’ members of the gang and has been present for some of the gang’s more nefarious capers.

As the legend behind his nickname goes, Gary was hangin’ out with his grand-kids a few years ago, most likely trying to coerce them into to following in his footsteps and adopt his outlaw ways. Gary stepped away to “use the woods”. Walking back to the group after doing his business, Gary over heard his grand-kids talking about him.

He was still a short distance from the rest of the group, when one of his grand-kids turned to the others and said “grandpa ripped one”. Gary instead thought he heard the words “grandpa’s a ripper”, and believed his grand-kids were referring to his ruthlessness, not his flatulence. After thinking about it for a moment he came up with the derivation, “GrandpaRipper”, and adopted it as his nickname. In fact, he was the only member of the gang to join and bring his own nickname.

The MGL nickname, “BaconRipper”, is a yet another derivation, and all kidding aside, is a tribute to his prowess at the grill, and in cooking his two specialties; bacon and steaks. He is tasked with cooking the precious apple-wood slab of bacon, and barbecuing the steaks from the side of beef. And fortunately for the others, Gary is not known to be overly flatulent while riding with the gang or when in the kitchen.

This well-dressed, well-spoken outlaw is a smooth-talker, but in reality, is nastier than an angry pit-bull. His weapon of choice is neither gun nor knife, in fact, it is his smooth talk. Beware, he is s skilled con-man, pool hustler, and card shark. If he tells you he has a bridge to sell you in NY, steer clear. If you sight this man, please contact the local sheriff.

Weapon of Choice: Not know for carrying any physical weapons, however this silver-tongued devil is know to disarm both adversaries and beautiful, rich widows with his eloquent speech and enticing stories of adventurous feats. DO NOT BE FOOLED, this man, despite not carrying physical weapons, is able to disarm you, and generally have you give him what he wants. Treat him with respect.