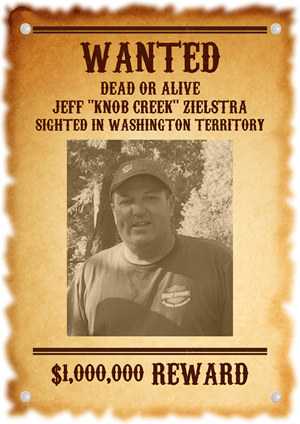 Jeff “Knob Creek” a.k.a.”The Judge” Zielstra has been a long time member of this hard-talkin’, hard-drinkin’, hard-ridin’, two-wheeled steal-horse ridin’ band of outlaws, but is a more recent convert to the band of two-wheeled riders with the purchase of the mighty Gold Suzuki.

This tough-talkin’, dirt-slingin’, whiskey-swillin’ outlaw is known for his unique choice of weapons, a revolver also known as the “Judge”, which fires rifled .410 shotgun slugs, making it a hard-hitting option in a small package.

The beauty of this weapon is once adversaries stare down the barrel of this cannon-sized pistol, even with its limited ammunition capacity, no-one ever seems to want to be the first to step up and face “Judgement” from Knob Creek or his Judge.

This combined with his rugged, yet no-nonsense good looks, and generally nasty-looking gaze, usually prevents him from ever having to use the Judge to issue any type of verdict in the first place.

His claim to fame is having used his tough countenance and the threat of The Judge, to disarm 20 Mexican soldiers during the Texas-Mexican war, who were transporting gold to General Santa Ana to finance the Mexican war effort. The gold would have been used to finance Santa Ana’s armies to occupy and subjugate the (then) independent people of Texas.

Pretending to be a member of the Texas Rangers, Knob Creek surprised the soldiers and brandishing his cannon-sized pistol, fired one shot which put a 2-bit sized hole through one of the soldier’s canteens. Startled, the soldiers didn’t react for a moment, and that was the moment Knob Creek needed. As water drained from the hole, he slowly waved the Judge in front of the soldiers, fixing them in a steely gaze and said “I’m looking for four brave men” — daring the first four who moved to meet an untimely end. None of the soldiers wanted to meet their “Judgement” that day. He stole all of the gold without harming a single soldier, letting them escape to send a message to the “Napoleon of the West” (Santa Ana), not to mess with Texas. In reality he planned to keep the gold for himself all the while and made off with a tidy sum.

Despite his ability to avoid using his weapon with intimidation, do not underestimate him, this man should be considered armed and extremely dangerous.

Weapons of Choice: “The Judge”.410 5-shot Revolver and an evil eye. Treat him with respect.