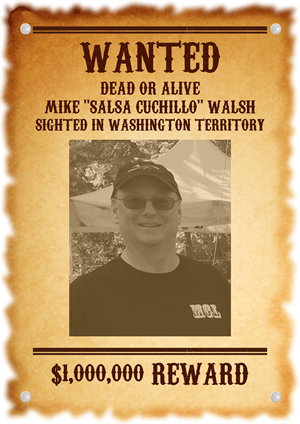 This mean-spirited member of the gang, Mike “Salsa Cuchillo” (Salsa Knife) Walsh, is known as such for his skill and daring with his weapon of choice; a sharp-bladed paring knife. Another member of the surly group who prefers to keep four wheels to the trail as opposed to two, he can often be found traveling with “Cookie”, and when found together, this duo form an especially nasty combination.

“Salsa Cuchillo” pretends to stay non-engaged at times, and you may find him sitting by the fire with Don Marcos (Cookie) slowly whittling away at an avocado, or a tomato, getting ready to prepare his signature salsa, or his other favorite side dish, guacamole. But don’t let his calm exterior fool you. This knife wielding, snake-of-a-man is lightning fast, and can go from slicing an avocado, to a man’s throat, in a split second.

And those few who have come up against him and lived to tell the tale — have found it a mistake to think they’ve escaped if he misses with that first knife. “Cuchillo” (as he’s called for short) often carries multiple, sharp knives, which he can deliver quickly and on target, being deadly accurate at a distance of over 15 feet.

In one famous escapade, this MGL outlaw is once known to have robbed a caravan of ladies-of-the-night. As the ladies were about to be robbed, a number of them tried to escape from one of the stagecoaches. So quick and accurate is Cuchillo, he was able to throw ten knives that pinned five ladies via their dresses to the stagecoach in which they had been riding, without injuring any of the girls. While they were trapped, Cuchillo relieved these hard-working girls of their gold.

Do not be fooled by his calm demeanor and steer clear of any man you find on the trail who offers you salsa, guacamole, and chips, as this is one of the ploys he will use to try and rob you. This man is armed and dangerous. If you feel you have seen this man, or know his location, contact law enforcement immediately.

Weapon of Choice: As stated, prefers many styles of small, rapidly deployed knives. DO NOT BE FOOLED, this man, despite not using firearms, is able to quickly kill 5 or 6 men at a surprising distance and uses his calm demeanor to lull you into a false sense of security, then will strike unsuspecting prey with lighting fast speed. Treat him with respect.