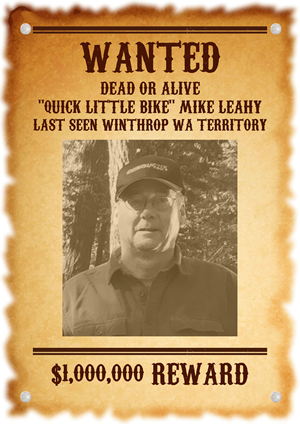 “Quick Little Bike” Mike Leahy, another long-time, no-account member of this smellier-than-a-skunk band of hard-ridin’ thieves, is named such on account of his preference for riding a smaller, yet quick and nimble Suzuki 650. He adheres to this philosophy to such a degree, that he rarely even carries his prized Colt .45 pistol, preferring to shed every once of weight to keep his steel-horse as nimble as possible.

While sometimes ridiculed by the other steel-horse riders who boast larger steeds and bigger guns, “Quick Bike Mike’s” (as he is more often called) track record speaks for itself, he has never been caught, and unlike the others in this foul-bred group of misfits, he has never spent one night in jail.

As such, he often is used as a diversion for the main thrust of the gangs nefarious capers. After the loot has been secured, Quick Bike makes a big show and an obvious getaway on his bright red steel-horse. Invariably, the confused and outwitted local law enforcement “specialists” follow Quick Bike, who leads them on a merry chase while the remainder of the gang leave in another direction with the loot, only to meet up later after Quick Bike has left the sherrif in the dust.

So fast is Quick Bike Mike, the biggest personal escapade of his long criminal career involved stealing a sack full of them newfangled paper things called “US Treasury Notes” worth over 1 million dollars that was being readied for a transfer between a US government wagon train and and a US Treasury rail-car being guarded by over 40 US Treasury agents —  simply by timing his approach so perfectly, he snatched the canvas bank note bag literally out of the grips of the surprised and befuddled agents and sped off. By the time they had reacted, and mounted a chase, Quick Bike Mike was far outta site.

The more intellectual member of this gang, some of the gang’s most daring raids were actually planned by Quick Bike, including their most notorious robbery, the “St. Valentines Day” robbery.

Despite seemingly one of the less violent members of this foul-breathed band of social misfits, do not underestimate his capacity for violence. Like an animal that has never been caged, if ever cornered, Quick Bike has the propensity and capacity to react like any nasty, cornered and deadly quick animal might, by lashing out violently with deadly results. Avoid this man at all costs and report any sightings of him to your nearest authorities.