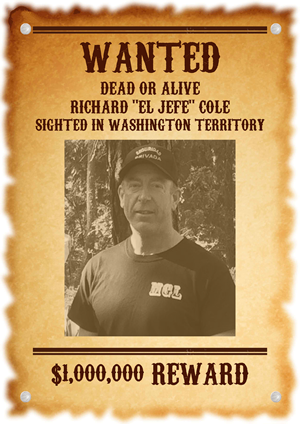 This long-time no-account has terrorized innocent victims from the stodgy campus of Ohio State University, the Black Hills of South Dakota, the high plains of Colorado, to Tierra del Fuego, and now corrupts what was a formerly peaceful neighborhood in the Washington Territories.

Known so well throughout the west, and so fierce, even Pawnee warriors give this man a wide berth.

While he takes credit for the for the notorious and deadly “St. Valentines Day Massacre”,  he was mis-identified in the news articles and in reality is responsible for the “St. Valentines Day” robbery, where he and the MGL gang raided a train bound from the east to the west coast. In this much less bloody, but still heinous crime, the gang made off with the entire shipment of lady’s underwear bound for the stores in San Francisco, to be sold as gentlemen’s gifts for their sweethearts on St. Valentine’s Day.

The haul was so large, on this job the gang needed “Cookie” to drive the chuck-wagon to haul the stolen goods. What made the crime especially heinous, is they not only stole the underwear shipment, but stole the underwear from all the ladies on the the train as well, leaving them, well, naked.

During the escape, the rest of the gang on horses provided a rearguard to screen the slower moving chuck-wagon from pursuing train marshals.  One of the crates on the wagon burst open, and the wind caught the bloomers and sent them flying across the desert only to get caught on the riders. The gang managed to escape, but left the passengers on the train with the memorable vision of El Jefe and the rest riding off into the sunset with ladies bloomers stuck to various parts of their gear and streaming out from behind their horses.

This outlaw is known to be of foul mouth and uses few word, but is deadly accurate with a sidearm. He is to be considered  armed and extremely dangerous. Like the Pawnee, give this man a wide berth if sighted, and contact the proper authorities immediately.

Weapon of Choice: 9mm Semi-auto which he uses with deadly accuracy, Treat him with respect.